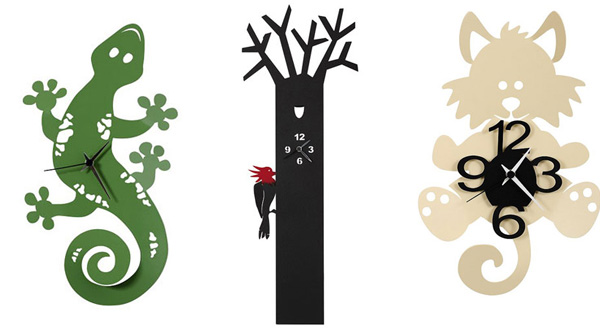 Clock represents time. Chandeliers, glass wares and furniture are not the only means of decor. People might look at other items of your house or not, their eyes would definitely find the clock, and a unique design that matches the interior is always a road to good appreciation. We have selected 15 unique designs by Italian designers Arti & Mestieri:

1. Blondie Clock: Silver metal and a matte background with coated powder, this arresting piece of designer work can turn faces in no time. The face is made of glass and frosted with the numbers that encircle it like spirals.

2. Big Bang Clock: The Big Bang Clock has the same elegant glassy front like the Blondie Clock but the metal is black and the matte laser cut.

3. Engima Clock: The designers kept the name of the clock totally apt to its mysterious look and stunning performance. All the quarters other than 9 of the clock make swirly red wires in a funky manner which is not even flat to the front, but protrudes outside.

4. Luna Park Clock: Witty, smart and enchanting are the words apt for the designing of this clock. The clock stands like glossy spider with its black face, numbers at the end of ribbons supporting the wall and measurably beautiful depth reflecting in the shadow.

7. Fast Food Clock: The face of the clock is placed on an omelet where the hook to the wall in the spatula right behind it.

9. Green Gecko Clock: The pretty green gecko with a swirl in the tail that protrudes out of the face has a really cool design. It would look awesome in a children’s bedroom.

10. Woodpecker Clock: The clock has numbers cut out from the face of the black metal trunk and the woodpecker makes sure to let you be aware of its presence by making pecking noises.

11. Miaow Clock: The clock has a kitten which moves its head and tail forward and backward, adding a great depth and dimension.

12. Full Moon Clock: The full moon clock is divided into two parts back to back, such that the upper part protrudes out giving a depth where the white front and the silver back has some numbers cut out.

13. Cloud Clock: The glass face is frosted to a cloud in the second clock and the numbers are made of black metal. The other two clouds present on the either vertical side of the face are cut out.

14. Gasoline Clock: This clever clock is designed like primitive US gasoline pump. The number dial is on the white glass face which is frosted and the canny designer has put the numbers very distinctively.

15. No Smoking Clock: We all want to tell them the same thing, that thing which no one listens. So here is a mind blowing idea to place a no smoking clock on the front doors, especially bars and clubs.