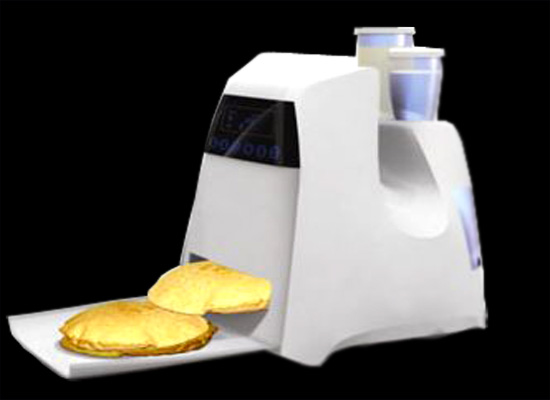 Top of the pick – Ever wished to get rid of the cumbersome and time consuming chapati-making task? Here’s your wish come true! The Rotimatic by Pranoti Nagarkar Israni is an automatic roti maker; that does the mixing, making and baking all on its own. Just the flick of the button and the chapati is ready. What you gotta do is add water and flour to the machine; and leave this innovative roti maker to do its job. Compact, elegant and user-friendly, the roti maker sits on your kitchen top; and prepares chapati for your family in just a flash of a second. The smart ingenious attributes of this cute little buddy won it the top position in the Singapore 2009 Business Plan Competition. Read more In-depth Review of other Roti maker Products.

Rotis are a significant part of Indian meals. No meal can be considered complete with the rotis missing out from the menu. People prefer having chapattis straight from the griddle into their plates. However, this trend had almost vanished some years ago owing to the lack of time. Roti making is a lengthy process. It starts with doing the dough and then rolling out small dough balls into a circular shape; and then putting them on a hot plate and then waiting for it to get done.

There was a time when homemakers had to follow this extremely tiring routine; as there was no other option for them. Especially in hot summer days;  it becomes a pain to stand for so long in kitchens and do this tiresome task. In some Indian families, there is this tradition that the females (mothers, wives) make chapattis; and serve them hot to other family members. After serving hot chapattis to everybody, the poor homemaker has to eat all alone in the end. Indian wives and mothers make this sacrifice only to serve their husbands and children fresh, hot rotis. This trend however, is only feasible to be followed in villages or in homes; where the woman is only a homemaker and not a working woman.

Rotimatic comes to the rescue

In today’s busy world where there is dearth of time; it becomes very difficult for women to spare a good deal of time for chapatti making. Having hot and tasty rotis had become almost next to impossible for many people.

Then technological advancements came to play and using state-of-the-art technology, an automatic roti maker was invented. The machine took away all the burdens and offered easy, time saving, and comfortable roti making technique to the users. It enables users to have fresh, hot, and tasty chapattis whenever they want.

The machine is like a savior especially for families wherein everybody is working and has little time for making meals. It saves time and energy of the users and makes them happy.

And one feature of the roti makers that cannot be missed is their cost-effectiveness. Today, the cooking gas prices have gone up so high; that it has become difficult for many families to manage their cooking expense. In such a situation, a roti maker is truly a saviour, as it consumes little electricity while making meals. Thus, roti maker is an ideal combination that is cost effective, time effective and highly efficient.

Things to consider while buying a Roti Maker

Roti maker is a super machine, which is time and energy efficient. It is a fantastic combination of a rolling pin, rolling board, and the griddle. You can use these machines to make chapattis and “paranthas.” To ensure that you are buying a high quality and a durable roti maker, following are some features and points that you must take into consideration while buying a roti maker.

You must check the plate or the griddle and ensure that it is made of forged aluminum. This feature of the griddle is essential for the even distribution of heat that will be responsible for making soft and evenly cooked chapattis. The other feature that you should look out for in the griddle is the non-stick surface. If it is not a non-stick surface then there is a possibility that the chapatti gets stuck on griddle, so a non-stick griddle is well required. An 8″ griddle is what majority of people go in for, but if you want to make good-sized “paranthas” then probably a 10″ griddle size is what you should hunt for.

Ensure the roti maker that you buy has an indicator light fixed on it. This light is the only way that can guide you with the actual time when you should start putting in dough balls and the rest of the procedure. The light is a signal that tells you it is time for you to start, as the griddle is sufficiently hot to cook.

Making chapattis in a roti maker also require a certain level of initial practice. If you own semi automatic roti maker in which you need to put in kneaded dough to make rotis, you should ensure that you prepare dough with extra water to make it soft. If you will put in hard, tight dough then the rotis you will get will also be hard.

Another precaution that you must take is to coat the base and the top of the griddle with a little oil. This way the dough will not stick on either side. To make evenly cooked chapattis in a semi-automatic rotimaker, you should know the skill to handle the machine appropriately.

Disadvantages of the roti maker (in terms of usage)

Every product that has advantages has a downside too. The same goes for rotimakers as well. Loaded with so many benefits, the disadvantage that a rotimaker has is the fact that you cannot have rotis made with rotimaker after two or three hours, as the rotis turn hard. Moreover, you cannot use dough stored in your refrigerator, as the rotimaker can only make good chapattis with soft dough.

Here are some of the most advanced and useful roti makers to make your life easy in the kitchen:

Rotimatic is a fully automatic roti maker, which is a device with a dimension of 40 cm x 40 cm x 40 cm. It is such a marvel that has ten motors, fifteen sensors and a total of 300 parts, which work together to give its users tasty, hot chapattis at a speed of one per minute. You can call this machine a robot that makes fresh chapattis. Rotimatic is a brainchild of Zimplistic, a venture founded by Pranoti Nagarkar and Rishi Irani based in Singapore.

Nagarkar says that the major motivation behind the invention of this machine is the very fact that roti making is a tiresome task. She used to see her mother making “garam-garam” chapattis for everybody and serving them hot, but herself eating alone in the end. And when she grew up, she was also expected to make rotis. She tried hard to polish her roti making skills but could not. She says this was the major reason that gave impetus to the whole idea of inventing a roti maker with her partner Rishi.

What makes Rotimatic a unique rotimaker is its small size yet great results. The machine comprises of three containers with seals on top. One container is for the dry ingredient, flour; the container cannot take liquid or semi-liquid ingredients, so you cannot make pancakes and similar items.

Separate containers in the Rotimatic

The functioning of Rotimatic consist of  five simple steps – measuring, mixing, kneading, making, and baking of rotis. To start with, you need to plug in Rotimatic and place the filled containers in the appropriate places. Let it heat for about five minutes, so that it reaches a temperature of 500 degrees Fahrenheit. Then use the LCD screen to feed in your requirement related to the thickness, crispness, and the quantity of oil you want in your chapatti or parantha. In the end, push the start button and let the processing start.

Rotimatic starts mixing ingredients that you can see from a se-through space on the machine. It makes a single dough ball at a time, and then flattens it into a roti.

The first roti might take a little longer, as Rotimatic takes that extra time to get prepared. According to the size consistency that you put in, the robot decides the size of the dough ball, and then pushes it into a chamber for flattening. Finally, hot, crisp, soft, yummy rotis are ready. You can clean Rotimatic fast after you finish using it.

This is a semi-automatic roti maker comes with a double Teflon coating and a non-stick griddle. It is super easy to clean and the high quality electronic components of the device gives it an overheat protection. It is high on efficiency and is a big time energy saver, as the adjustable temperature thermostat is one of the major features of Fashion Design Rotimaker. This device is so small in size that you can place it anywhere in the kitchen.

The other features of this rotimaker are – skid-resistant feet, variety of colors, heatproof handle, power light indicator, and a long durable life.

It is always good to keep up with the pace, as times have changed people also need to change with it. Today, a plethora of products are available that aim to make our lives as comfortable and hassle-free as it was never before. Rotimaker is one such product that is making lives, especially for the working women, much more simpler and happier.

5 Tips to Using a Backpack Sprayer

Creep into the heart of darkness with...

Fotoflōt displays your photos in a new...

Why should you hire a mortgage planner...

What to Know Before Selecting Apron Sink...