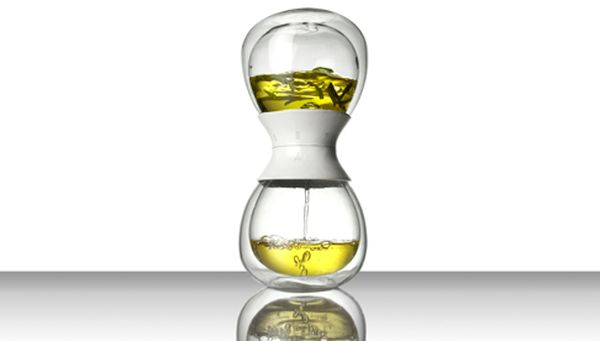 Those who love tea know that brewing tea is an art. While steeping for less time can cause the tea to taste awkward, steeping it for too long can make the tea bitter. This is precisely why many individuals tend to use a timer when brewing tea. Sadly, this doesn’t bear fruit at times as well. Luckily, there is now a way to take care of this; the Tea Time Tea Maker. This personal tea maker device will ensure that you get the perfect cup of tea every single time.

The hourglass design of the Tea Time tea maker comes with a clear message that tells users when they need to steep the tea and when they need to strain it. Each side of the device features a thermal insulate doubled walled cup. The cups are attached to a central mechanical timer via rubber rings. The bottom cup is used to hold the water and the tea leaves.

Brewing tea has never been more enjoyable than with the Tea Time tea maker. All one would need to do is put the leaves and hot water in the bottom cup of the device. The timer is set to the required steeping time and the cup is inverted so that the bottom side that has the leaves and water now comes to the top. After the timer runs out, the liquid tea will start draining into the lower cup, just like the sand that passes from one side of the hourglass to the other.

The use of a traditional spring loaded timer rather than an electronic one helps the Tea Time tea maker to remain low tech. The timer restrains the tea in the upper cup and allows it to pass through to the lower cup only after the set time has run out. The leaves are also retained in the upper cup, thus offering tasty tea that is both relishing and refreshing to drink.

Making tea no longer needs to be a cumbersome task. With the Tea Time tea maker, one can easily brew the perfect cup of tea in a timely and hassle free manner.

The 5 compact espresso machines ideal for...

How to clean a coffee maker

Reasons you should use efficient heating and...

Trendy accessories to liven up your home