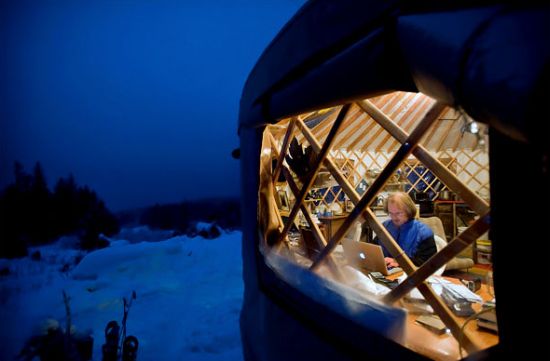 A family of three, Erin McKittrick, Bretwood Higman and their 11-month-old baby live in a yurt (without any shower, plumbing or toilet, but they do have broadband) in a remote Alaskan Town. So, I thought we could too, taking in consideration the comfortable places that we stay in. The last trip that they took last year seems to have continued, as they are still camping, living in a tent. They are living in a yurt since 2008, on spruce-covered mountainside of the Kenai Peninsula in the coastal town of Seldovia. The town can only be accessed by a boat or an airplane. The best part of this house is that it has no plumbing (they collect water from a near by well), shower and toilet (they use an outhouse), but does have broadband internet access. And, instead of choosing the propane heater they went in for wood stove to keep their yurt home warm.

The kitchen has a sink with no running water. In winters when it is cold the yogurt also stays chilled on the counter-top. However, in summers, they keep food cool in a root cellar that they made out of an old refrigerator. They discovered yurt while they were returning from 4,000-mile trek and passed through the town called Homer.

You could live in a Mongolian-style tent too…with broadband but no toilet was last modified: May 23rd, 2013 by Community Writer | Community.Drprem.com

Serve it in style with the Galaxy...

Cuddle up this winter with space-inspired quilts